DOOM blew the industry open when it released not only because it was technically ahead of its competition, but because it was mechanically designed with chaotic, fun and fast paced gameplay in mind.

This reaches every corner of the game from the weapon design which is fits into every pattern I discussed in my prior post. iD software placed weapons with scatter early in both DOOM and DOOM2 and this lead to the ability of players to quickly blast through demon hordes. Most of the early game enemies are easy fodder for the Shotgun and Super Shotgun, a double barreled variety. The levels also reflect this, despite E1M1's wide open courtyard, many of the the rooms are optimally shaped corridors for shotgun blasting. DOOM2 did even better in its design of map02 - Underhalls. Map for reference: 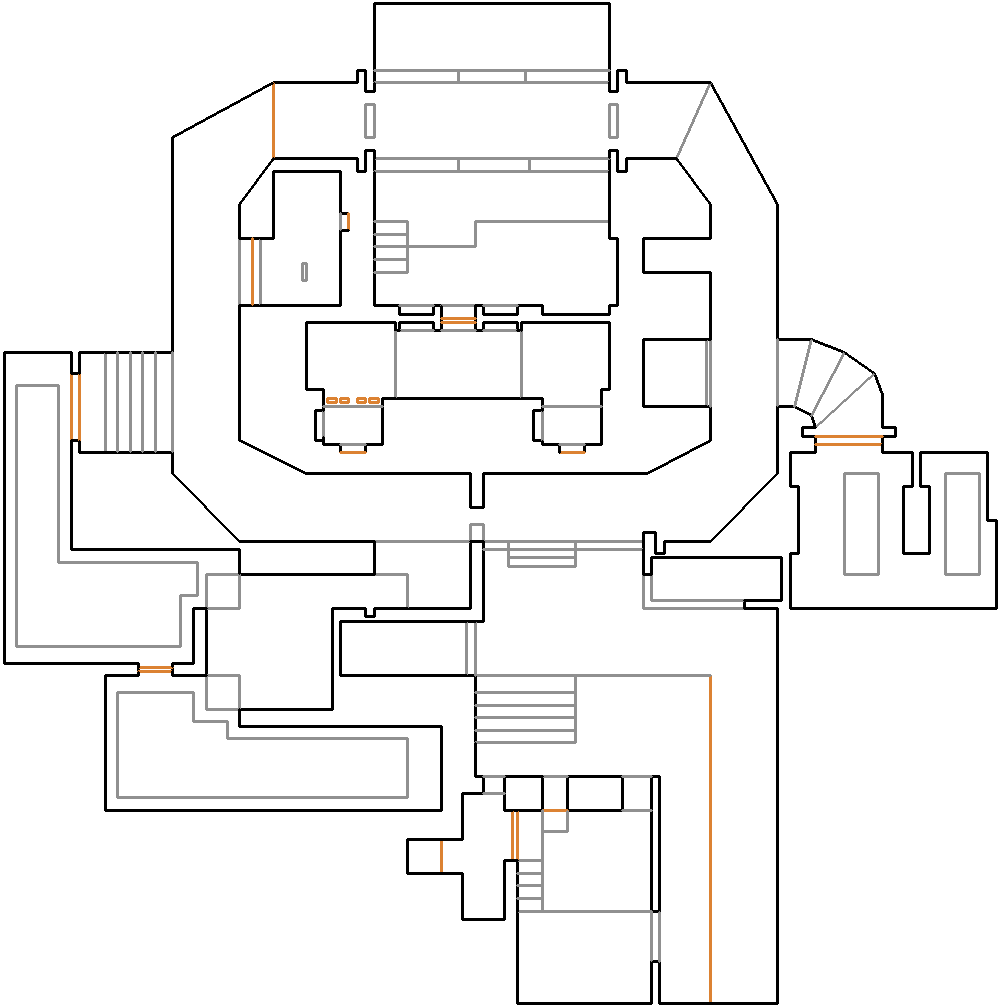 DOOM later rewards the player with a rocket launcher, which is optimal in tight spaces, provided the player is careful not to shoot themselves. This however is why DOOM 2's Super Shotgun is so clever, if a player connects all of the guns pellets with a foe, the Super Shotgun yields 120 points of damage, the same as a rocket, but capable of being used at close range.

Doom's levels are essentially 2D maps with artificial height values. This plays out exceptionally well for DOOM because it allows for a mapping system which yields a map that is easily understood by the player as it lacks a Z axis. DOOM 2016 used a similar map, but slanted it at an angle to allow for the player to see rooms below rooms. The original DOOM did not have a boss equivalent to the Icon of Sin, It did however have the Cyberdemon and Spider Mastermind which later were used more like standard enemies in the later levels of DOOM 2, this highlights one of DOOM's strengths, its enemies are modular and lightly scripted, this allowed iD a ton of freedom in their level design. Want a boss fight right now, drop in a Cyberdemon and make an interesting arena, open up some walls.

DOOM allowed for levels that were abstract in nature. By not being hyper focused on realism, the iD team could make levels that largely didn't make any sense from a realistic standpoint, however they were intriguing and new, feeling fresh to the player in ways real life environments often do not. This abstract design, and general modularity, as well as the 2D nature of dooms mapping system allowed for DOOM to be given a treatment I discussed in an earlier post: Procedural Level Generation.

Oblige is a level generator for the DOOM family of games. It has used a variety of methods for level generation and now relies on placing prefabricated sectors (essentially macro objects, think rooms rather than sectors (a connected set of line segments). Oblige now uses Shape Grammars, a form of production system that yields an artificially intelligent behavior. Oblige can feel a tad similar at times, but for the most part, it is amazing what it is capable of, it yields some amazing results and I've killed more hours than I'd like to admit feeling around levels generated in it. Some levels feel pretty close to the style of maps I've seen in games made by the DOOM team, with just a tad less touch on design of course. The levels can be generated with a proper weapon progression, and even key doors to gate progression.

Conclusion DOOM's design leads to more interesting levels that result in less stale gameplay. Its weapons are placed intelligently and progressively in strength and scale. It even lends itself to Procedural Content Generation due to its design.